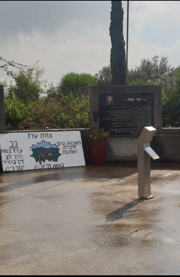 The crewmen of tank 3 Beit, later known as Oz Crew, fought in the Second Lebanon War. They were part of Company Gimmel of
Battalion 53 that is part of the 188 Barak Brigade.

The tank commander was Oz Tzemach from Reut, the gunner was Yinon Yigal Nisan from Ma’aleh Adumim, the driver was Dan Broyer from Beit Hilel and the loader – radioman was Haran Lev from
Ma’ayan Baruch, where this monument has been established.

On the morning of July 12th 2006, the Hezbollah terror organization launched a bombardment of Katushya rocket fire over the northern communities in Israel and IDF outposts along the Lebanese border
with Israel. Under the cover of this assault, the Hezbollah attacked an IDF patrol moving along the border fence, killing 3 soldiers and kidnapping 2 more.

Following these events, the government of Israel declared war against the Hezbollah that was later referred to as the Second Lebanon War. In the first stages of the war, the IDF attacked various enemy targets all over Lebanon using only air force and artillery units. Nevertheless, the Hezbollah continued firing rockets and missiles against civilian targets all over the northern region of Israel.

The next stage involved the gradual use of both regular and reserve army ground forces of the IDF penetrating inside Lebanon.

Battalion 53 of Brigade 188 was deployed at that time in the area of Maccabim located in the Binyamin region. The battalion began preparations and training for entering Lebanon.

On August 6th Company Gimmel from Battalion 53 received its first mission to make contact with Battalion 75 of the 7th brigade in order to defend a logistics route. Over the following days, the company was positioned in a fortified outpost near the village of Ainata  in the Bint Jbel region.

From this outpost, they got out to perform various operations including opening routes, conducting ambushes, patrolling the area and performing complicated evacuation missions. During this period the company was also successful in striking many terrorists.

On Saturday, August 12th 2006 the battalion was given the command to advance to Shekif A Nimmel ridge in order to provide cover for the advancing Golani infantry brigade towards the town of Tibnin.

The battalion located in Ainata, began moving at 4:00 in the afternoon with Company Alef leading and Company Gimmel following. The rest of the battalion was behind them.

It was difficult maneuvering on the hilly terrain without any alternative route. Just before nightfall, a heavy bombardment of anti tank missiles rained over Company Gimmel from the direction of the village of Kunin. The company commander gave the order to advance in order to find shelter, and at the same time an anti tank missile hit tank 3 Alef that was moving in front of tank 3 Beit of Oz crew.

The shooting mechanism of the tank was hit and was inoperable. The tank commander was injured and unable to function. The company commander gave the order to retreat but at the same time his own tank flipped over and was severely damaged. The battalion commander and the commander of platoon 3 who were in the region rushed to help him.

The loader in tank 3 Aleph, which had been hit before, replaced the injured commander, took command of the tank, but he struggled to move the tank backwards. Oz Tzemach, the commander of tank 3 Beit, observed the tank having difficulties and stayed on site to  assist the commander while providing him cover  with live fire.

Oz Crew found a sheltered position along the mountain slope, giving tank 3 Aleph the possibility to bypass. As tank 3 Aleph passed by tank 3 Beit, it stopped briefly to receive instructions from Commander Oz.

Over the radio the voice of Oz Tzemach was heard delivering his last message: ‘Commander, here is 3 Beit, last one moving’

A while later, the deputy company commander left the Ainata fortified outpost and together with an engineering force, using a D9 bulldozer, to evacuate the damaged  tank of the company commander. On the way, the operator of the D9 informed them of a tank that was on fire. When the deputy battalion company commander arrived to the site, it was found that an anti tank missile hit tank 3 Beit all the crewmen were killed.

Company Gimmel continued its withdrawal and the 4 crewmen of Oz Crew were brought for burial in Israel.

Two days later, on Monday August 14th, 2006, a cease fire was declared, and the IDF began a gradual withdrawal from Lebanon. The company continued to fulfill its missions inside Lebanon until the final retreat on October 1st, 2006.

Every soldier from the tank of Oz Crew posthumously received decoration for bravery from the northern commander of the IDF, saying as follows:

This decoration is given for the commitment, fighting spirit, personal example, professionalism, camaraderie and fearlessness.

The Second Lebanon War lasted for 34 long days during which 121 soldiers were killed.

May their memory be blessed.

Flowers fall on you from above // Idan Haviv

Flowers fall on you from above,
Round tears roll onto you.
The earth opened its mouth in your honor…
This is your sister above, calling and crying.

Rest your eyes, Oz, rest in peace.
It's dark outside, yet your mother is still here with you,
She can't bring herself to get up and leave you here alone,
She stays, stretched out and begging, with her face to the ground.

Your smile rises within me like the sunset,
Beautiful, beautiful, but disappearing in the darkness,
From the ends of the earth I call to you… How can you not hear?
From a black ram's horn we will anoint you, Oz…
So that every star will know.
In the shelter of His wings you are hidden now and forever
Yet from the angel that touched you we beg: